There is a long history of tennis being played in Oxford, on public courts and those belonging to colleges. The earliest mention of a university tennis player in Oxford (a Fellow, named Richard Holt) comes from the records of Merton College in 1492 and we know there has been a real tennis court in Merton Street since at least 1595. Our present building, on the site of the earlier court, was constructed in 1798, making it the second oldest court in England after Hampton Court Palace. The Oxford clubhouse was completely rebuilt in 1997, thanks to the generosity of the Broadbent family, and includes changing rooms, a club room and a meeting/dining room. The court itself was refurbished in 2002, but requires on-going attention.

Over the centuries, many courts have fallen into disuse or been turned to other uses. However, the revival of interest in the game over the last few decades has resulted in old courts being brought back into commission (Chicago, closed 1922, reopened 2012), with plans in place for the re-opening of historic courts (in Ireland and Holland, for example). Most encouragingly, new courts have been built (at Middlesex University in 2000 and at Radley College in 2008) and plans are progressing for entirely new courts (at Wellington College, in Sydney and in Bordeaux). Of the total of 44 courts currently in play in Australia, Great Britain, France and the USA, over half of these are in England. Most of the English courts are located in the South East and are part of sporting clubs (Lord’s and Queens), at stately homes (Hatfield House and Petworth House), were once attached to large private houses (The Hyde near Bridport, Holyport and Hardwick House) or are at educational establishments (Oxford and Cambridge Universities, Canford School and the Oratory School). 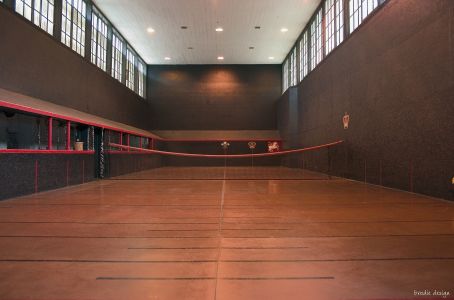 Looking down the court from the service end. 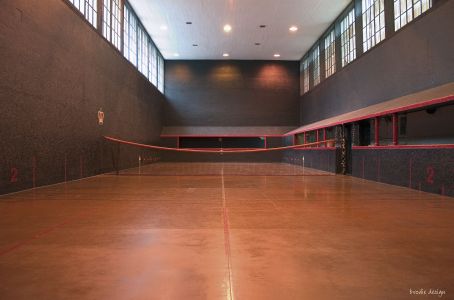 Looking back from the receiving end.